President Abinader assures that the DR is a safe bet to enjoy, invest and generate opportunities for the future

President Luis Abinader today led the official opening of the 28th edition of the Florida Caribbean Cruise Association (FCCA) conference, where he affirmed that the Dominican Republic is a safe bet to enjoy, invest and generate opportunities for the future.

“Our country is today a leader in economic growth in the region; we have the highest levels of foreign investment in our history; month after month we break visitor records. We enjoy a climate of institutional, economic and social stability that few countries in the region can boast at this time,” he said.

The President, accompanied by the Minister of Tourism, David Collado, said that the cruise industry has to stand up stronger than ever and they have in the Dominican Republic an ally to achieve it.

He explained that from the Dominican Republic to all participants of this conference guarantee commitment, safe ports, serious, transparent procedures and a scheme of first class operations.

“Here they will find the best destinations and also the best business opportunities,” he emphasized.

The head of state said that one of the major efforts of his government is oriented towards the development of the tourism industry, its empowerment, sustained growth and the consolidation of the Dominican Republic as one of the most important tourist destinations in the world.

“That is why today I am so pleased to be with you, a benchmark in the cruise travel industry and that today you have chosen the Dominican Republic as a stop on your route to success,” he said.

The governor thanked everyone for their interest and efforts to strengthen ties, continue working together and complete this successful voyage.

He pointed out that the Florida Caribbean Cruise Association is a leading non-profit trade organization comprised of 22 affiliated cruise companies, which operate more than 100 ships.

This organization, he stressed, is a sign of excellence with an unblemished roadmap in favor of tourism, development and quality employment.

“For this reason, and representing these values, I find no better place to hold this meeting than our country. We share objectives and goals, and I am sure that together we will reach the port we all want to reach: that of progress and shared development,” he said.

He also said that they have a common history of success, but, above all, a bright future ahead of them.

He added that the Dominican Republic is everyone’s home and assured that, starting today, and with the contributions of this conference, it will be the home of many more people.

He welcomed all the participants of this meeting and all those who choose the Dominican Republic as a tourist destination, as well as the foreign investments that help transform this country.

“I assure you that no one will regret it. Dominican Republic is in fashion and we are back to conquer the world from our coasts and ports. I always say it, and time and work will prove me right; the best is yet to come, and we will do it with all of you as allies,” concluded President Abinader. 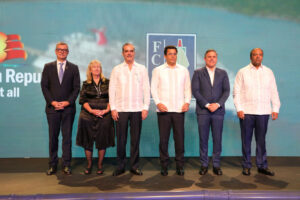 Tourism is the industry of happiness

On his side, the Minister of Tourism, David Collado, said today is a special day for the country and cruise tourism in the region and that this sector is the industry of happiness, which today is on track to recover the numbers of 2019 in some countries and in others far surpassing it.

He said that the country will have the best year of tourism in the air and maritime routes, where he highlighted the public-private work and the support of President Abinader.

Meanwhile, the president and CEO of Royal Caribbean International, Michael Bayley, highlighted the growth experienced by cruise tourism in the Dominican Republic.

The CEO of the FCCA, Michele Paige, was in charge of the welcoming speeches at the cruise event, held for the second time in the country, as a Platinum member of the FCCA.

More than 500 representatives from some 40 countries

More than 500 representatives from some 40 countries, 14 shipping companies from the 23 members that make up the FCCA and more than 60 cruise executives, including presidents, CEOs and platinum members, are participating in the conference.

The conclave focuses its activities on analyzing the challenges and future of the industry’s operations in the new post-pandemic normality.

The event represents another great opportunity to continue strengthening the leadership of the Quintana Roo destination in the industry and the promising future that will bring the construction of new seaports in Samaná and Cabo Rojo, Pedernales.

The event was attended by the Administrative Minister of the Presidency, José Ignacio Paliza; the general director of the Dominican Port Authority, Jean Luis Rodríguez; the general administrator of Banco de Reservas, Samuel Pereyra, and the director of Politur, Brigadier General Minoru Matsunaga.

Also present were the president of the FCCA, Adam Cecerano; the ministers of Tourism of Honduras, Yadira Gómez; of Saint Lucia, Ernest Hilaire; of Saint Vincent and the Grenadines, Carlos James; of Saint Martin, Omar Ottley; of Saint Kitts, Marsha Henderson; of Barbados, Lisa Cummings; of the Cayman Islands, Kenneth Bryan and of Jamaica, Edmund Bartlett.

Also, the Minister of Economic Development, Ruisandro Cijntje; the Governor of Sinaloa, Mexico, Rubén Rocha; the Secretary of Tourism of Sinaloa, Mexico, Rosario Torres; the Parliamentary Secretary of the Bahamas, John Pinder II; the President of the Executive Port Commission of El Salvador, Federico Anliker López; the Commissioner of Tourism of the Virgin Islands, Joseph Boschulte; and the Executive Director of the Puerto Rico Tourism Company, Carlos Mercado.