Greater regional integration, the generation of clean energies taking advantage of the abundant natural resources or the fight against corruption can be engines for growth in Latin America, according to leaders of several countries of the continent said on Wednesday in Davos.

In the panel “Leadership for Latin America” held today at the Davos Forum, the president of Colombia, Gustavo Petro, spoke of the potential of Latin America to generate clean energy in the global fight against the climate crisis.

His colleague from Ecuador, Guillermo Lasso, referred to the fight against corruption in order to invest in social issues, and that of Costa Rica, Rodrigo Chaves, to measures to improve the investment climate.

The Brazilian Minister of Finance, Fernando Haddad, called for true regional integration and for making the American continent “a world center of clean energy production” and the Vice President of the Dominican Republic, Raquel Peña, explained that her country pays special attention to SMEs, which contribute significantly to economic growth.

“In South America we have two great potentials in relation to the climate crisis, to contribute to manage this global problem, and it goes through the region’s capacity to generate clean energy and protect the Amazon,” said Petro.

“We could perfectly, if we build an American power grid from Patagonia to Alaska (USA), in a certain way sell our clean energy potential to help the United States change its energy matrix, which is the first element for a solution to the crisis,” he said.

“We would move from a matrix centered on oil and coal…to a matrix of foreign investments centered on the construction of clean energies in South America, with a guaranteed market,” he said.

The transformation would also imply moving away from an extractivist economy towards a productive economy, he added. 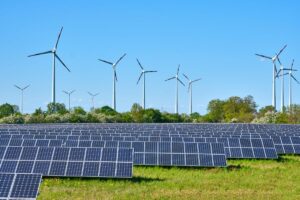 Lasso, in turn, highlighted his government’s fight against corruption and also vaccination as the fundamental aspects that have allowed his country’s economy to advance after the crisis aggravated by the covid-19 pandemic.

“I always said that controlling the pandemic was part of Ecuador’s economic plan,” he said. And he noted that, in 2021, “the first post-pandemic year or part of the pandemic, we achieved economic growth of 4.2 %. In 2022, we put public finances in order”.

“The fight against corruption, the control of public finances, of public spending, avoiding waste generates resources to be able to invest in social issues,” he said.

For his part, Chaves said that Costa Rica has worked to improve the investment climate and is working on actions to expand this market.

As part of his strategy to integrate with Latin America, he said that he will sign a free trade agreement with the President of Ecuador after months of negotiation and that Costa Rica also seeks to be part of the Pacific Alliance.

He explained how Lula’s style of government of increasing the relationship with the rest of the world achieved, in his eight years of his first term, that Brazil grew 8% when the world was growing at 2%.

Haddad supported Petro’s ideas on the generation of clean energies, from the sun, wind or green hydrogen, which, he said, although they have the limitation of being difficult to transport, is also a potential that attracts companies that want to produce from clean energies”.