The Center will be enabled to train the human capital that will work in the development of tourism in the province and the entire region.

President Luis Abinader handed over to the National Institute of Technical Professional Training (INFOTEP) the historic Guarocuya hotel in the province of Barahona, where the Guarocuya Technological Center Hotel Tourism School will be installed to train the human capital that will work in the development of tourism in the Pearl of the South and the entire region.

The president stressed that the new infrastructure would be tripling Infotep’s own facilities and the services that this important institution performs in the country.

He added that now Barahona will have such facilities, not only with the hotel part, but also will help in the technological part because the development of the entire tourism area will require staff with these capabilities.

The head of state indicated that this is a cohesive plan that in addition to the technical and professional development, contemplates the road infrastructures that the region demands.

“With the road we are building from Barahona to Enriquillo and from Enriquillo to Pedernales is a revolution in real terms that we have here in the south,” he said.

President Abinader said that what has been explained are the plans that are working to create jobs and the infrastructure that can sustain the jobs.

He expressed that the facility is not only going to have the support of Infotep, but that an important hotel company will also collaborate in the administration of the hotel to work together in the training of the students. 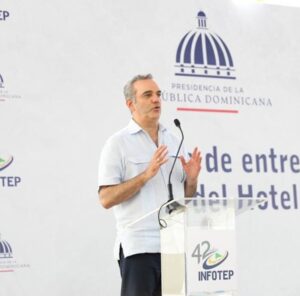 “We now with education, with infrastructure, with jobs we change from the vicious circle to the virtuous circle of development,” he stressed.

In this sense, the general director of Infotep, Rafael Santos Badía, affirmed that the center is another milestone and a timely example of the initiatives that President Abinader is developing to promote the development of the southern part of the country.

He added that, located in an ideal enclave such as Barahona, this center will facilitate the training of some 21,000 human resources in the hospitality and tourism industry, as well as competent technicians throughout the region.

“We will be preparing human talent for the South, anticipating the needs of businesses and tourist centers, hotels, restaurants, entertainment centers and commercial enterprises producing goods and services that arise and will continue to grow as a result of the investments that are already beginning to be made throughout the area,” he said.

For his part, the Minister of the Presidency, Joel Santos, affirmed that the government headed by President Luis Abinader is placing special emphasis on professional technical training, especially because of its great importance in the generation of jobs.

He informed that the tourism training center of Barahona will operate as a hotel school and will provide training services in classroom, virtual and semi classroom.

“The main axis of the training will be Dual Training, a modality of the teaching-learning process, which can be carried out in coordination with the companies, so that the apprentice applies what he learns in real situations, under conditions and interactions with others, as part of the company, which facilitates him to reach a level of development in a job position,” he said.