The Minister of Tourism, David Collado, began work this Sunday on the reconstruction of the recreational infrastructure of the Malecon of San Pedro de Macoris, at a cost of more than 260 million pesos.

The project for the reconstruction of the 1.84 km long Malecón de San Pedro de Macorís coastline includes the creation of a linear park with a total intervention area of 60,000 square meters, within which 12,000 square meters of sidewalks will be built.

The work will include a landscaping intervention along the entire length of the seawall, the central islet and the seafront. In addition, recreational areas such as plazas, playgrounds, outdoor gymnasium, volleyball court, among others, will be added.

The Minister of Tourism, David Collado, highlighted the impact that the project will have as a tourist attraction and the benefits that will be obtained by the small and medium-sized businesses that operate in its vicinity.

“We cannot continue living with our backs to the sea. This intervention will mark a before and after in San Pedro de Macorís”.

In addition, the construction of 9 double sales modules with their deposits and equipment: (Freezer, Refrigerator, Sink, tables, chairs and stools); modules of bathrooms, offices of Politur; with their equipment.

In the intervention of the 1.84 km. of the marine littoral that are distributed in 7 zones. There are 2 large plazas, one giving access to the beach (Zone 1 – 2) and the other being the beach sales area plaza (Zone 3) where the sales modules were built. In addition, there are 8 accesses from the sidewalk to the green area of the coast, as well as other small squares for recreation. 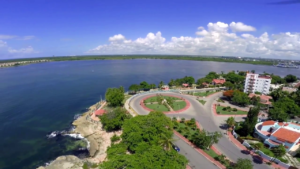 The project, which is carried out through the Executing Committee of Infrastructure of Tourist Zones (CEIZTUR) of the MITUR.

During the event, the Board of Aldermen of San Pedro de Macorís presented an award to Minister David Collado, declaring him “Adoptive and Meritorious Son” of the province, for the contributions he has made to La Sultana del Este from Mitur.

Minister Collado was accompanied at the event by Franklin Peña, senator of San Pedro de Macorís; Aracelis Villanueva, governor; Raymundo Ortiz, mayor and Nelson Arroyo, president of the Board of Directors of INDOTEL.

Also present were the vice ministers of MITUR; Gabriel Español Seijas, director of CEIZTUR; local and municipal authorities; Minoru Matsunaga, general director of the Tourist Police (POLITUR), among other personalities.