The Dominican Academy of Gastronomy (ADG) achieved outstanding participation in the IX Dominican Week in London emphasizing the important contribution of gastronomy in the transmission of knowledge, through the senses, about who we are.

“We worked hand in hand with the renowned Dominican chef Erik Malmstem, to communicate through 6 dishes, a story of flavors and leave a mark of friendship that would contribute to the consolidation of the excellent cultural, diplomatic and commercial relations between the Dominican Republic and the United Kingdom,” says Luis Ros, president of the ADG.

The first dish was fish simmered with coconut, puffed rice, avocado and pearl onion. Crispy, unctuous and coconut-influenced, it was appropriate for introducing a delicate symphony of flavors.

The second move was a shrimp salpicón. As if we were in the Bay of Sanchez, with crunchy green plantain, cilantro and sweet chili. Tropical and refreshing to the palate.

The third step was goat with oregano with Brugal 1888, sour orange and spices. A proposal of our native flavors that revealed the hybridization of Spanish and African cultures that represent us.

A fourth temptation was the pork crackling with Casabe, mojo and pickled onion. A contrast of warm, crunchy, viscous and very slightly vinegary tones that highlighted our Taino and Iberian heritages. 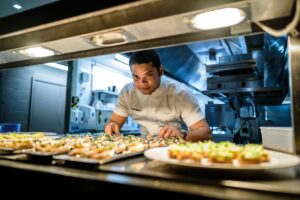 To conclude the sixth course, Chef Malmstem offered a guineo sponge cake with Dominican cocoa mousse, cinnamon and macadamia. With sweet, spongy, creamy and crunchy textures, we bid farewell to what was a journey of flavors that delighted the participants in the IX Dominican Week in London with jewels of Dominican gastronomy.

About the Dominican Academy of Gastronomy

The Dominican Academy of Gastronomy (ADG) is a non-profit organization, focused on fostering research, dissemination, promotion and protection of the cuisines and gastronomic activities of the Dominican Republic, taking care of the purity of cultural traditions, as well as supporting the modernization of the corresponding culinary techniques, taking into account international trends and widely communicating their characteristics and most relevant aspects.