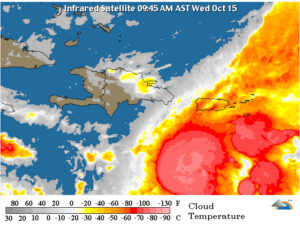 A powerful late-season major hurricane, it formed from a tropical disturbance which moved into the Caribbean sea from the tropical North Atlantic during the second week of October.

Turning northeast, Omar strengthened into a category 3 hurricane before vertical wind shear caused the cyclone to weaken as it moved into the subtropical Atlantic ocean.

Damage to the Lesser Antilles was somewhat extensive, although no specific cost is avaliable. This is the first time the name Omar has been used for any tropical cyclone in the Atlantic.

A tropical disturbance in the eastern Caribbean Sea was in an area unfavorable for development in the second week of October. While drifting across the region, upper-level winds diminished enough for the tropical disturbance to strengthen. The cyclonic circulation could be seen on radar, surface observations, as well as QuikSCAT data.

The disturbance eventually developed into Tropical Depression Fifteen on October 13. It strengthened to Tropical Storm Omar the next day. Omar rapidly intensified that afternoon and reached an intensity of 70 miles per hour (110 km/h). Later that evening, Omar became a hurricane.

After leveling out in intensity, another intensification phase took place on October 15. That evening, it strengthened into a Category 3 hurricane. Early on October 16, Omar peaked with winds of 125 miles per hour, then rapidly weakened after leaving the Leeward Islands due to increased wind shear. Despite the cooler waters and high wind shear, Omar briefly re-intensified again to hurricane status the next day before weakening back to a tropical storm.

On October 18, Omar rapidly became disorganized and degenerated into a remnant low that morning despite having tropical storm-force winds. The remnants of Omar continued across the Atlantic before being absorbed by a larger extratropical cyclone by October 20. 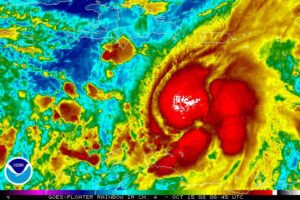 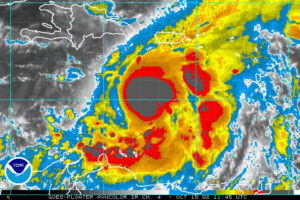 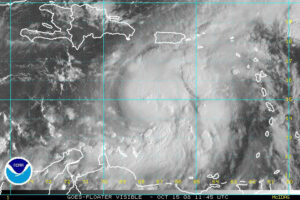 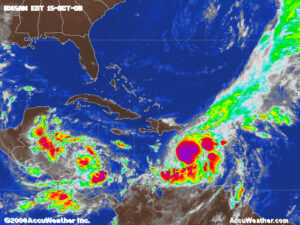 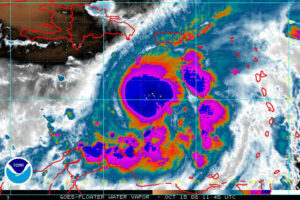 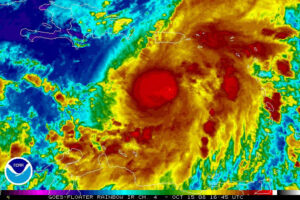 On October 13, tropical storm watches were issued for Puerto Rico, the U.S. Virgin Islands, the British Virgin Islands, and the Dominican Republic from Saona Island to Cabo Engaño by the respective governments of those islands.

On October 14, the United States Coast Guard closed Christiansted Harbor. The huge Hovensa oil refinery on St. Croix began shutdown procedures on October 15. Despite its high intensity (Omar passed through the Leeward Islands as a strong category 3 hurricane), damage was relatively light as the eye and eyewall remained over water. Some flooding was reported and some trees were knocked down, but there were no reports of significant structural damage. One indirect death was reported as a result of a cardiac arrest while preparing for the storm in Culebra.

The southern part of the Windward Islands, including Aruba, Curaçao and Bonaire suffered from the strong winds coming from an unaccustomed direction, caused by Omar’s unusual path in its early state. While the trade winds usually blow from east to west, and all major beaches lie on the leeward side on the west of the islands, on October 14 Omar brought strong westerly winds with it and caused severe damage on the coasts, including a lot of power outages and fallen trees.

October 14 marked the first time that the name Omar was used for any tropical cyclone in the Atlantic; however it was used in the west Pacific and retired after Typhoon Omar of the 1992 Pacific typhoon season. Also, Omar was the first hurricane since Hurricane Lenny to strike the Leeward Islands from the west.