Achieving a direct flight between our countries represents one of the most important and transformative achievements that the Dominican Republic and Jamaica have made in their 58 years of diplomatic relations”.

Senator Kamina Johnson Smith, Minister of Foreign Affairs and Foreign Trade of Jamaica and the Ambassador of the Dominican Republic to Jamaica, Angie Martinez, received the first Arajet flight along with a rich representation of local government authorities, including Minister of Transport and Mines, Audley Shaw; Minister of Industry, Commerce and Investment, Senator Aubyn Hill; Leader of the Opposition and Chairman of the People’s National Party, Mark Golding; Archbishop of Kingston, Rev. Kenneth Richards, among others.

The Dominican airline Arajet, in conjunction with the Dominican Embassy in Jamaica, opened on Monday a direct route between Santo Domingo and Kingston, thus connecting for the first time both nations directly.

The flights, which will have two weekly frequencies, represent a valuable opportunity for Arajet and the Embassy to boost the air and tourism offer, strengthen cooperation ties and build a bridge that allows the communication and transportation of national and international travelers.

Kamina Johnson Smith, Minister of Foreign Affairs and Foreign Trade of Jamaica, said that “Arajet’s direct flight between Santo Domingo and Kingston inaugurates a new era of bilateral relations between our countries”.

Meanwhile, the Dominican ambassador to Jamaica, Angie Martinez, highlighted the achievement represented by the connectivity between the two nations, which she described as a historic milestone of great importance for trade, investment, tourism and cultural exchanges between the Dominican Republic and Jamaica. “Ladies and gentlemen, today is a golden day in our history. Achieving a direct flight between our countries represents one of the most important and transformative achievements that the Dominican Republic and Jamaica have accomplished in their 58 years of diplomatic relations. 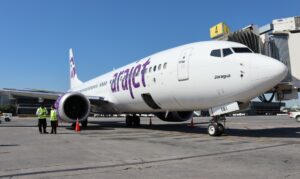 Angie Martinez confessed that achieving direct connectivity was one of her “most important” goals since her appointment, for which she developed an intense work agenda with government institutions in Jamaica and the Dominican Republic.

“I am greatly excited to see Arajet’s aircraft arrive and I thank its CEO and founder, Victor Pacheco, for having the vision to connect both countries and turn our dream into reality. This direct Arajet flight is definitely a game changer, a starting point to write a new and better chapter in the history of our countries,” said Martinez after the arrival of the first flight at Norman Manley International Airport from the Dominican Republic. The diplomat emphasized that the objective of her administration is “that Jamaica and the Dominican Republic strengthen their potential as commercial partners, in a context of reciprocity and balance, where both nations build mutual wealth”.

For his part, Victor Pacheco Mendez, CEO and founder of Arajet said, “My dream is that a tourist visiting the Dominican Republic from Europe or the United States for example, can spend a few days in my country, learning to dance merengue and enjoying our wonderful white sand beaches, and then take advantage of those vacations and come to Kingston and be infected with reggae and visit Ocho Rios, Montego Bay and the magical waterfalls that this beautiful country offers”.