Mexican tourists like to explore the natural wealth of other countries, and the Dominican Republic has been one of their favorite destinations.

The Ministry of Tourism of the Dominican Republic announced that in October 2022 it received 41,912 Mexican visitors.

The Mexican market “is attracted by the offer that combines cultural and beach attractions in cities such as Santo Domingo, La Romana, Punta Cana and Samaná, among others”, the Ministry announced.

Direct flights to the Dominican Republic have favored Mexican travel. The airlines with this route are Aeroméxico, Arajet and Viva Aerobus.

David Collado, head of Mitur, said that 491,788 international tourists arrived in October, 32% more than in the same month of 2019, when they received 372,205 travelers from other nationals.

It was the second consecutive October to break the record for international tourist arrivals. In the tenth month of 2021, 443 thousand 16 visitors arrived, 48 thousand less than this year. 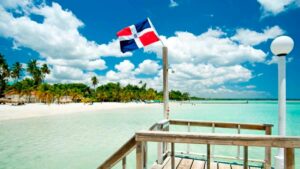 From January to October, the Dominican Republic registered 6.7 million visitors in 2022. By the end of the year, it is expected to reach seven million foreign tourists.

Of the total received to October, 5.8 million travelers arrived by air, 8.7% more than in the accumulated 2019.

By sea, 900 thousand tourists arrived, 64 thousand more than in 2019. “This data confirms the recovery of the cruise industry, which was also strongly impacted by the pandemic,” said Collado.

Likewise, the economic revenue from the arrival of international tourists was seven thousand 278 million dollars from January to October 2022. By the end of the year it will reach eight billion dollars, according to information from Mitur.